Home › Why Fed’s Tapering Is a Done Deal

FOMC Minutes suggest that everyone at the Fed is onboard with QE tapering. Moreover, the Asian surge in exports is driven mainly by the U.S., meaning strong economic activity in the last months of the year.

Yesterday, in the North American trading session, the FOMC Minutes were released. The minutes belong to the previous FOMC Meeting that took place six weeks ago and offer more details about the Fed members' actual discussions.

In other words, the minutes come to confirm or not the market’s expectations or beliefs regarding what the Fed will do next. This year, the debate was whether the Fed would taper or not its bond-buying program (QE) and the minutes to confirm the tapering will start mid-November or mid-December.

The minutes left no doubt that the tapering starts, and judging by the market consensus, the Fed will reduce its buying of U.S. Treasuries and mortgage-backed securities by $10 billion, respectively $5 billion per month. By mid-2022, the QE program should be over.

The Fed used everything in its powers to communicate to markets its intentions. Its forward guidance, of which the minutes are part of, did not signal a change of heart.

So, from the Fed, the tapering has a green light. How about the U.S. economic activity? 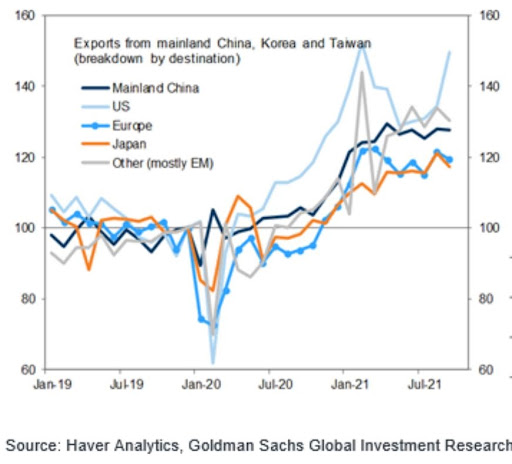 One interesting detail was that the Fed staff sees risks to economic activity to the downside. Supply constraints are cited as an explanation for rising inflation.

But inflation could also rise due to strong demand. In this case, it would suggest an uptick in the economic activity much higher than the Fed expects – and, indeed, as suggested by the fact that the U.S. was the reason for the Asian exports growth since the summer. In other parts of the world, the growth in import demand has flatlined – but not in the U.S.

All in all, the tapering is a done deal. How the markets will react is another thing.