Nikkei 225, the Japanese stock market index, broke out of a declining trend after the Prime Minister announced his resignation recently. The Japanese yen weakened on the back of the Bank of Japan's Kuroda signalling easing beyond COVID-19.

The breakout comes on the back of investors awaiting more fiscal stimuli from the new leadership to combat the effects of the COVID-19 pandemic. We talk about packages worth trillions of yens – and so the Nikkei 225 index regained the 30,000 points level, albeit only for a short period. 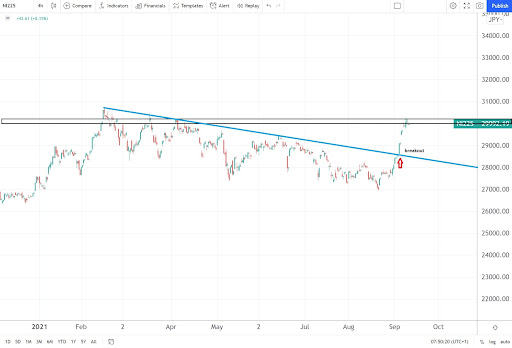 The move higher in the Nikkei 225 index triggered pronounced weakness in the Japanese yen. The two main currency pairs, the USD/JPY and the EUR/JPY, have both traded with a bullish tone lately, regaining the 110, respectively 130 levels.

The Japanese yen's decline was fueled by the Bank of Japan's Governor Haruhiko Kuroda who said in an interview that the monetary easing would remain in place even after COVID-19 abates.

As such, with fiscal and monetary stimuli poised to continue, the stocks moved up and the yen declined. What can go wrong?

To sum up, while recent events are bullish for the stock market and bearish for the yen, the Japanese economy and monetary policies are not independent of the events on the global stage. Once again, financial markets' correlations are key to understanding the future market direction.