Olaf Scholz, the SPD (i.e., social democrats) candidate as the next German Chancellor, widens his lead over the Merkel bloc. A Scholz-led government will bring many changes to Germany and Europe, thus having an impact on the common currency.

The major political event in the Eurozone lies ahead – the German federal elections. Scheduled for the 26th of September, the elections mark the end of Angela Merkel’s era and perhaps the end of her party (CDU/CDS alliance) ruling in Germany.

According to the latest polls, the SPD (i.e., social democrats) leads in the polls, and their candidate, Olaf Scholz, is credited with the biggest chance of winning the Chancellor seat. For market participants, the outcome of the German federal elections is essential as the different parties have different fiscal stances.

Because the German economy is the largest in the Eurozone, changes in the fiscal space may affect the course of the euro and the volatility in the euro currency pairs. No further than last week, Christine Lagarde, the European Central Bank’s President, cited the changes in the German VAT as one of the factors affecting inflation and prices in the official inflation data. 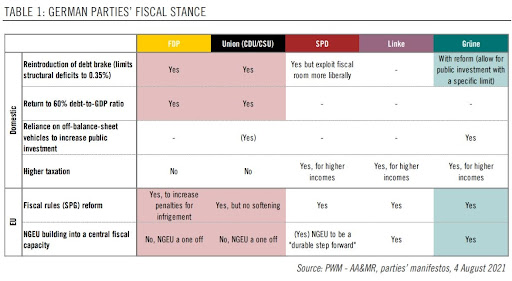 Challenges to a Scholz-Led Chancellorship

The recent polls favour the current Finance Minister, Olaf Scholz, as he has the biggest odds to become the new Chancellor. It is hardly a surprise for financial markets, but he will face a hard time forming a government.

Scholz and the SPD will need the support of the other two parties in order to form a government. An alliance with the Green Party (i.e., Grune) and the FDP might be one possible outcome, but some compromises must be dealt with. For instance, the FDP wants Finance Minister’s job and demands an immediate reduction of the German debt. Moreover, it insists on the reintroduction of the borrowing restrictions lifted during the pandemic.

It becomes clear that a coalition is not easy to form, and the negotiations may drag for a while. For financial markets, it means uncertainty, and it may be a drag for the euro pairs in the weeks or months that follow.