Home › How Can the Fed Surprise at the Jackson Hole Symposium?

Today marks the start of the Jackson Hole Symposium. How will the markets react to the main event of the year?

Today marks the start of the Jackson Hole Symposium – the Fed’s main event of the year outside of the regular FOMC (Federal Open Market Committee) meetings. The Federal Reserve (Fed) of the United States is hosting an annual event where it usually invites central bankers from around the world.

Because of the COVID-19 pandemic, this will be a virtual (i.e., online) event. But, that does not mean it will not be important. Last year, the event took place in similar conditions, and the Fed shocked the markets by announcing a change in its mandate – it moved to average inflation targeting around 2% instead of a fixed 2% target.

What can traders expect from this year’s event? Despite the fact that equity markets are at record highs, the U.S. dollar did appreciate in 2021. A close look at the EUR/USD or the AUD/USD pairs reveals that the dollar is higher compared to the start of the year. This is surprising, especially if one considers the ongoing loose monetary policy in the United States. 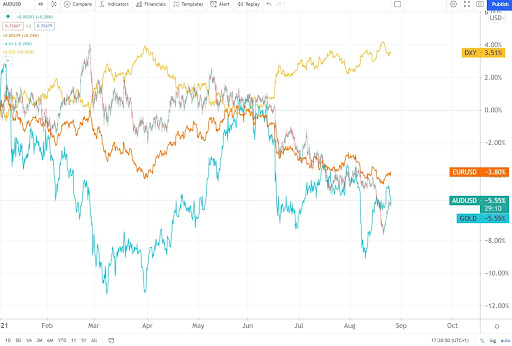 One may associate the dollar’s strength with the COVD-19 pandemic. More precisely, as vaccines were announced and the vaccination campaigns gained ground in 2021 in the developed economies, the U.S. dollar strengthened. It reflected the strength of the U.S. economy.

Now that the Delta variant is a concern, the Fed may surprise the markets by being more dovish than expected. The reflation narrative could come back with a vengeance, so the Jackson Hole Symposium may turn out to be an important inflexion point for financial markets.

Some notable changes have happened recently. First, the European Union announced yesterday that it would discuss reimposing travel restrictions to the U.S. Second, the third quarter GDP forecasts have been downgraded in response to the recent weak economic data  (e.g., poor retail sales, housing starts, and even manufacturing surveys).

All in all, the Fed may surprise markets by delivering a dovish speech when everyone expects more clues about tapering of the asset purchases. If that turns out to be true, traders are in for a sharp rise in volatility.