Home › Global Markets Review – What Happened in August and What to Expect Next?

Global equities gained in August, and so did bond yields. Developments in Asia to put further pressure on the global supply chain.

U.S. and European equities gained in August, supported by better than expected quarterly earnings. European financials look particularly promising heading into the end of the trading year, especially if we consider that central banks will likely start removing some of the stimuli from the markets.

Commodities had an interesting month – oil and precious metals declined in the first half, only to recover the lost ground and some more. The WTI crude oil price traded shortly back above the $70 level, putting further pressure on the worldwide prices of goods and services.

The Fed discussed tapering at the Jackson Hole Symposium, and the fixed-income market reacted immediately. The U.S. 10-year yield threatened to break above 1.38% during the month. Also, the bullish bias was seen in the U.K. 10-year yield, which increased from 0.57% to 0.62% on the month’s last trading day. 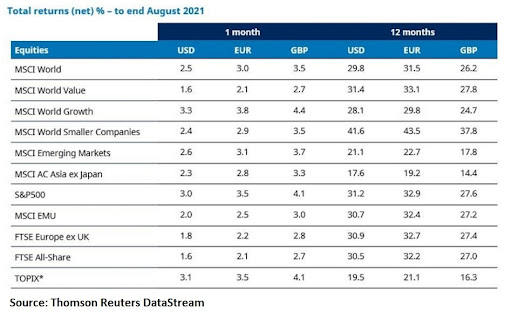 The currency market was trending as well. The U.S. dollar lost ground in August, fueling the equity market's strength. In Europe, the European Central Bank's September meeting looms large, as inflation reached 3% in August. The pressure mounts for the ECB to act, and the common currency was one of the winners in the currency market during August.

What to Expect for the Rest of the Trading Year?

The new trading month started with a cold shower for financial markets. Last Friday, the NFP ( nonfarm payrolls) report revealed that the Delta variant is taking a toll on the economy as the number of newly created jobs significantly dropped compared to July – only 235,000 jobs in August after 1.1 million jobs were created a month earlier.

In Japan, Prime Minister Yoshihide Suga resigned, and the stock market surged in response. The trend is likely to continue especially considering new fiscal spending announced by the candidates that remained in the race.

In Europe, the biggest threat to financial markets for the rest of the year comes from the German federal elections. Angela Merkel steps down as Chancellor, and Europe looks for guidance from the new leader. The race is tight, and the risk for euro traders is skewed to the downside, especially if the central bank is not delivering on its price stability mandate.