Crude oil traded back above $70 at the start of the trading week. Despite the impact of the Delta variant on oil demand and OPEC+ raising output, crude oil price benefited from a decline in supply in August.

OPEC has recently announced that it sees oil demand sharply higher in 2022. The news comes after OPEC+ increased the output – for example, Saudi Arabia's oil production recovered the September 2019 levels.

The bid in the price of oil is not singular. Instead, energy prices surged across the board, led by natural gas and electricity.

European gas prices have gained 60% since the start of August. Because winter lies ahead, the upward pressure on other prices of goods and services would likely lead to rising inflation in the months ahead. 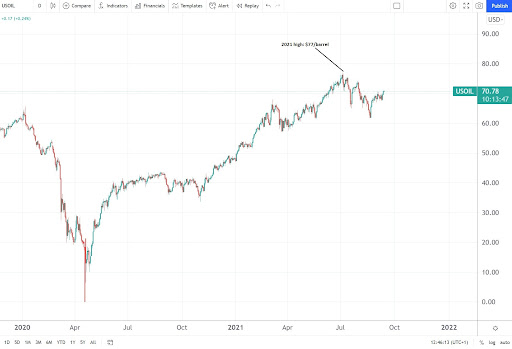 The developments in the commodity markets are eye-watering. The Bloomberg Commodity Spot Index, which measures the price movements of commodities, has reached a 10-year high.

As the world economies recover from the pandemic-led recession, demand for oil pushes energy prices higher across the board. While OPEC+ increased supply, it is estimated that the United States economy will import 62% more crude oil in 2022 compared to 2020. And this is a country producing 15% of the world's total oil production – but it needs more.

With oil demand still strong, the bullish case for the price of oil remains intact. For currency traders, the developments in the oil market matter because of the vital link between oil price, inflation, and interest rates. Higher oil prices fuel inflation, and thus central banks are pressured to react.

The WTI crude oil price traded as high as $77 in 2021. One should not be surprised if it tests the highs again.