Inflation data in the developed world is released this week, and the market participants expect it to rise further. Next week’s Fed decision looms large.

The week ahead is a critical one for currency traders for at least two reasons. First, this is the week when inflation data in major economies will tell us if the recent rise is transitory or if the prices of goods and services continue to inflate.

Second, this is the week ahead of the September FOMC (Federal Open Market Committee) meeting. The Fed is expected to announce the start of the tapering of its asset purchases, something the markets are aware of, but no one knows what the reaction would be.

U.S. Inflation Expected to Rise By 0.4% in August

The first inflation data release date is this Tuesday in the United States. The market participants expect the prices of goods and services in the United States to have risen further in August, by another 0.4% after an increase of 0.5% in the previous month. 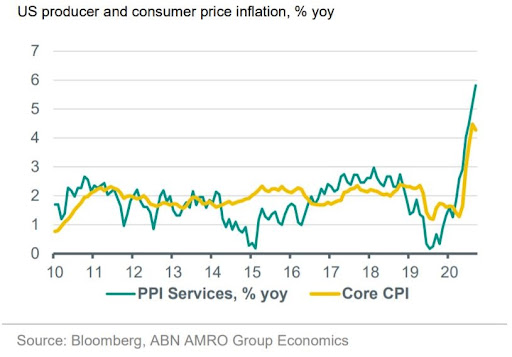 U.K. Inflation Set to Exceed the Bank of England’s Target

One day later, the U.K. annual inflation is forecast to reach 2.9%, well above the Bank of England target of 2%. The Bank of England keeps the bank rate at 0.1%  and still engages in quantitative easing despite the inflation rate reaching its target and set to rise more in the near future.

Besides the U.S. and the U.K., this week inflation in Canada and the Eurozone is released, too. The trend is similar throughout the developed world – rising prices for goods and services, but central banks view the increase as being temporary.

Inflation data is the most important data to watch in the week ahead. However, traders should take any market move with a grain of salt. The main event of the second half of the year for the currency market traders is the Fed’s tapering announcement. Next week, there is a high probability that the Fed will announce the tapering to start in November. As such, traders may decide to stay on the sidelines this week regardless of the inflation data.