Home › A Few Bearish Reasons for the EUR/USD

The EUR/USD traded briefly above 1.19 in the aftermath of the Non-Farm Payrolls September report. The most important currency pair of the FX dashboard bounced from below 1.17 – is the rally sustainable?

One day ahead of the most important central bank meeting after the summer ended, the EUR/USD failed to keep its bullish bias. The pair rose to 1.19 after the Non-Farm Payrolls September report revealed that the U.S. economy had a hard time creating new jobs in August.

But, the move higher was short-lived. The EUR/USD looks, in fact, vulnerable for at least the following reasons. 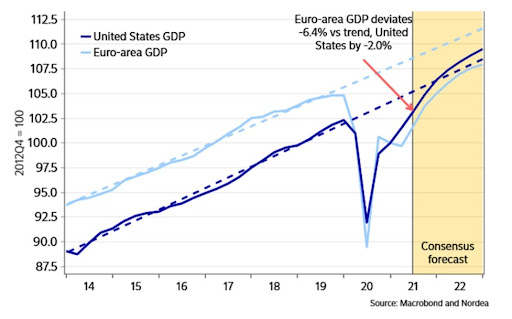 First, there is a huge gap between the Euro area GDP (Gross Domestic Product) and the U.S. numbers. In the second quarter of the year, the U.S. GDP was only 2% below the pre-pandemic trend. However, the Euro area GDP is a whopping 6.4% below the trend – a difference that should weigh on any attempts of the EUR/USD exchange rate to move higher.

At the end of September, the German Federal elections present a risk for the common currency. The Merkel era is ending, and the political parties are running a tight race. Merkel brought stability to Europe as she was viewed as a pillar for European integration – a change in leadership may take time and thus be a risk for Euro bulls.

The European Central Bank (ECB) delivers its monetary policy decision and press conference tomorrow. The risk is that the central bank will deliver a hawkish statement, hinting at tapering the asset purchases ahead of the Fed.

This alone is one of the reasons behind the recent EUR/USD rally, but traders should be aware that the ECB has an easier time explaining the rising inflation than the Fed. In Europe, inflation is up mostly due to skyrocketing energy prices, which are easier to explain as transitory.

Global Economy is Slowing Down

Perhaps the most important reason for a lower EUR/USD is the global economy because it is slowing down. We’ve already had a poor jobs report in the United States and Asian economies suffer from a resurgence in new COVID-19 infections. The risk for the global economy is skewed to the downside, which may trigger a flight to the U.S. dollar’s safety.